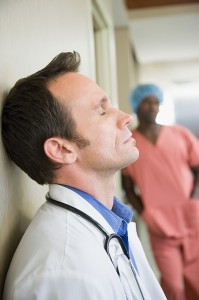 A middle aged man with depression came in today for his first psychiatric evaluation. He had lots of questions about the relationship between cortisol and depression, because his first serious depression, at age 45, occurred in the context of a severe work stress. And this work stress was associated with many physical manifestations of stress – fatigue, severely disrupted sleep, tachycardia, and increased incidence of infection.

This led him to wonder about the “stress hormone” – cortisol – and its relationship to his symptoms.

A recent review of this subject was published in the journal Psychological Medicine in 2013.

Cortisol is a hormone that plays a number of roles in the body, beyond its role as a stress hormone. It is one of the most important regulators of the circadian (daily) rhythms of the body. A key feature of normal morning awakening is a surge in cortisol right before getting up from bed. And right before going to bed cortisol reaches a very low level that persists through the period of normal sleep.

Cortisol is released in “pulses” that last about an hour, so its level varies from minute to minute.

The magnitude of those pulses follows a regular daily cycle. However, the fact that it is released in pulses, means that, at any given point in time, there is a wide range of normal levels, as 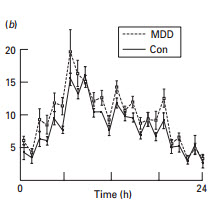 illustrated in this chart which shows average cortisol levels in someone with depression versus average normal levels of cortisol.

This means that it is possible for there to be a significant difference in cortisol levels throughout the daily cycle in someone with depression, while it is also very difficult to show that difference with a single cortisol level.

This means that the more levels you measure, the easier it is to see a difference.

By getting four levels throughout the day it is possible to see if overall cortisol level is elevated or if the problem is due to a disruption in the circadian (daily) rhythm of cortisol.

If the problem is a disruption in the daily rhythm (for example peak levels happening in the evening) then the solution may be to work on strengthening the appropriate daily rhythm with light and (perhaps) melatonin therapy.

If the problem is an elevated level over all the solution is a little bit more complicated.

The treatment that has the best data to show that it works is meditation. Regular meditation (our favorite is mindfulness practice, but any kind works) will lower cortisol elevation induced by stress, and improves other symptoms of stress (elevated heart rate, blood pressure, tremor).

There are not good, well studied, medications that can address this problem. Several drugs have been found to inhibit cortisol synthesis (e.g. ketoconazole, metyrapone) but they are of limited efficacy and they have significant adverse effects.

Mifiprestone is a controversial drug which blocks the effects of cortisol by blocking the glucocorticoid type 2 receptor, but it was introduced for its other major effect, blocking the effects of progesterone, which makes it a drug that can cause an abortion in a woman who wants to end a pregnancy. It has been studied in psychiatric patients, primarily at Stanford University, and has been shown to rapidly improve symptoms of psychotic depression, but its use in less severely ill patients would definitely be experimental.