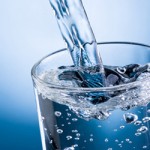 Does lithium have benefits for health when it is found at small doses in the water? This is the subject of a recent article in the New York Time (september 13th, 2014).

The article captured the attention of many readers of this blog and the companion one I write about mood disorders (moodsurfing.com).

It was tantalizingly entitled,”Should We All Take a Bit of Lithium?”

I think that one of the reasons for the interest was that it seems to violate a common view of this medication, a holdover from movies like One Flew Over the Cuckoo’s Nest, that powerful psychotropic agents, especially lithium, have profound negative effects on brains.

Here is how the article led off –

“Lithium is a naturally occurring element, not a molecule like most medications, and it is present in the United States, depending on the geographic area, at concentrations that can range widely, from undetectable to around .170 milligrams per liter. This amount is less than a thousandth of the minimum daily dose given for bipolar disorders and for depression that doesn’t respond to antidepressants. Although it seems strange that the microscopic amounts of lithium found in groundwater could have any substantial medical impact, the more scientists look for such effects, the more they seem to discover. Evidence is slowly accumulating that relatively tiny doses of lithium can have beneficial effects. They appear to decrease suicide rates significantly and may even promote brain health and improve mood.” 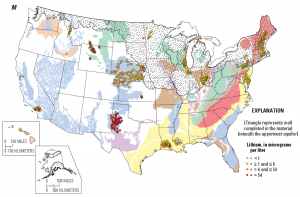 The map on the right shows how lithium levels vary by location in the United States. As you can see there is a fair amount of variation, although nowhere is the level anywhere near the dose given for treating mood disorders.

The article in the New York Times points out that an anti-suicide effect of both lithium taken at therapeutic doses and lithium in the water seems to have been fairly convincingly demonstrated. And, whether because of that effect or for other reasons, higher levels of lithium in the water are correlated with reductions in overall mortality in the population.

In addition, there are several studies showing that lithium counteracts the tendency for people with bipolar to have  a higher risk of dementia. In other words, if you don’t take lithium but you have bipolar you have a significantly higher risk of developing dementia, but if you take lithium your risk is no higher than in the general population.

It has been shown that lithium is associated with increases in grey matter in the brain. 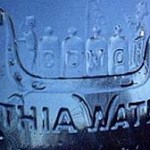 And now some studies are even looking at whether lithium may be a treatment for dementia.

It is too soon to recommend that people who don’t have another reason to use lithium take it for its beneficial effects on health. Although people have been doing that for more than a hundred years – Lithia Springs in Ashland, Oregon is a source of lithium that, at the beginning of the 20th century was bottled and sold for its health benefits. And people still come to Lithia park to taste the water.