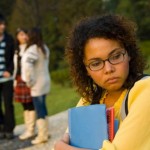 In a review article entitled, “Predicting bipolar disorder on the basis of phenomenology: implications for prevention and early intervention” by Gin S Malhi, et al, identified 28 articles that looked at the factors that predict the development of bipolar.

Non-mood symptoms, including anxiety or worry, energy changes, and attention or concentration problems seem to be more frequently seen in the prodrome of bipolar than mood symptoms.

In other words, classic mood symptoms are not generally present in the prodrome before a first episode. What is seen is pretty non-specific symptoms of anxiety and concentration problems, and symptoms of energy changes, hyperactivity and irritability.

This suggests that screening for risk of bipolar is not likely to be useful except in a high risk set of adolescents (such as the children of bipolar parents) since the symptoms themselves are not that easy to distinguish from the normal ups and downs of adolescence (in other words, if you screened the general population of adolescents you would find far too many people at risk to make the effort worthwhile).

However, the description of symptoms is good enough to identify adolescents who are at risk who merit particular attention.

One long term study found that the first unusual behaviors in those high risk adolescents who later developed bipolar, were fairly non-specific signs of stubborness and difficulty at school or with peers, but that there was a more specific set of behaviors that predicted that bipolar was close at hand – periods of high energy, sleep difficulties, excessive or loud talking, and problems with thinking or concentrating.

By contrast, studies that looked at the general population of adolescents (not those at high risk) have identified a slightly different set of symptoms in that population that point to increased risk of bipolar – mood fluctuation, episodes of depression and episodes of irritability. These suggest that overall stubborness and contrary behavior may not be the best predictors in the general population, the key risk factors for this group is episodic changes in mood, activity and functioning.

Finally, a longitudinal study in the same issue of Bipolar Disorders, “The predictive validity of bipolar at-risk (prodromal) criteria in help-seeking adolescents and young adults: a prospective study,” suggests that a specific set of criteria that combine risk factors and symptoms can predict the development of hypomania or mania symptoms in a general population with reasonable accuracy (25% of those in the high risk group developed these symptoms in the following year).

Aged between 15 and 25 years and fulfill criteria of at least one of three groups within the last 12 months:

For at least two consecutive days but <4 days: period of abnormally and persistently elevated, expansive or irritable mood and at least two criteria (three in the case of irritability) from the list:

For at least one week: depressed mood, or loss of interest or pleasure + at least two criteria from the list:

For at least one week: depressed mood, or loss of interest or pleasure + at least two criteria from the list: