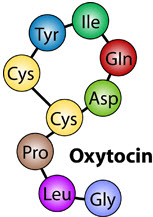 The nucleus accumbens (NAc) (or ventral striatum) is a central part of the reward system. The reward system has been the focus of much interest and research because of its role in the development and maintenance of addiction and depression. 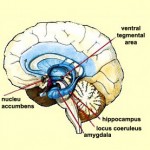 The reward system evolved to motivate survival behaviors and behaviors linked to reproduction and health.

Evidence from research in a great number of animal species suggests that social intelligence (adaptive social behavior) is also reinforced by the reward system.

Researchers have proposed that the neuropeptide oxytocin (OT) serves as a reward signal in the NAc for prosocial behavior.

The first strong support for this idea came from a famous study that showed that oxytocin receptors (OTRs) in the NAc of the prairie vole played an essential role in maintaining the prarie vole’s monogamous bonding and its very social behavior.

In the September 2014 issue of Biological Psychiatry, Loth et al. showed that gene variants (polymorphisms) in the OXTR gene, which encodes the OT receptor, correlate with changes in the processing of social information and functional magnetic resonance imaging assays of NAc activation patterns.

All of this leads to the suggestions that OT receptor agonists might play a key role in the treatment of conditions associated with impaired social intelligence and behavior, such as autism.