TMS improves memory. According to a study published in the Aug. 29 issue of the journal Science, “electrically stimulating a portion of the brain that coordinates the way the mind works can enhance memory and improve learning.”

The researchers used Transcranial Magnetic Stimulation (TMS) to indirectly stimulate activity in the hippocampus, a key part of the brain involved in the storage of memory.

Then they tested whether this allowed them to affect hippocampal function by stimulating the parietal cortex. 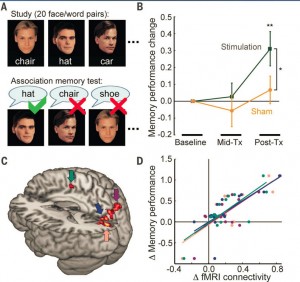 The study of transcranial magnetic stimulation (TMS) performed on 16 people found that “five days of stimulation for 20 minutes improved their performance on a memory test, while no benefit was seen after they got a sham stimulation.”

“After about three days, the stimulation resulted in improved memory, and [participants] got about 30% more associations right with stimulation than without.” In addition, “the MRIs showed that the brain regions became more synchronized by the TMS.”

Researchers are now “planning a study of TMS in older adults in the early stages of memory loss.”

This study not only shows that the hippocampus plays a central role in human memory but opens a window on an exciting new approach to enhancing memory in humans using a safe and non-invasive brain stimulation technique.