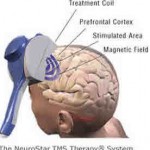 TMS is a revolutionary treatment for major depression that is being significantly underutilized, but it is also a very expensive treatment that does not work for many patients with treatment resistant depression.

One of the major issues impeding the use of TMS is the difficulty identifying patients who are likely to respond to treatment.

In an earlier blog post we pointed out that elevated C Reactive Protein may predict non-response to an SSRI.

This month, in Biological Psychiatry, there was an article that strongly suggested that severe anhedonia was a major predictor of non-response to TMS.

As in previous studies of TMS in patients with chronic and treatment refractory depression, Jonathan Downar and colleagues from the University of Toronto, reported that only about half of these patients responded to 6 weeks of rapid TMS (note that this is a much larger response than the STAR-D studies suggest would take place with another medication trial).

Interestingly, the seemingly more related question about interest in sex did not…

For more on this study you can see the abstract here –