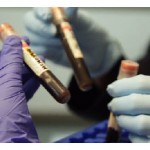 How many times has a new patient in the clinic asked, “isn’t there a blood test for depression?” Always in the past we had to say that there were no reliable tests that could identify depression. There was some evidence that functional brain imaging could do so but the technique was expensive and experimental.

In an article published in the journal Translational Psychiatry, Dr. Eva Redei at Northwestern University describes a blood test that may finally allow us to diagnose and monitor treatment for those with depression.

In the study, Dr. Redei and colleagues found that the levels of nine RNA blood markers in 32 patients (from 21 to 79 years of age) who had been independently diagnosed with depression after clinical interviews, were significantly different than levels in 32 non-depressed controls in the same age range.

RNA blood markers reflects the level of activation of genes, rather than the specific subtype of gene present. In other words, RNA blood markers look at a phenomenon that reflects brain function more than it reflects what is usually thought of as genetic inheritance.  As an example, it has been shown that regular exercise has a profound effect on RNA blood levels as exercise turns on and turns off individual genes in the brain.

After 18 weeks of cognitive behavioral therapy changes in the levels of the markers in those who responded to treatment made it possible to distinguish that group from the group of people who did not. For those who had to deal with skepticism about the scientific basis for psychotherapy, it’s exciting to see that a blood test can show the changes in the brain that take place as the result of effective therapy

There were two other important findings. One was that it was possible using the results from the blood test prior to treatment to predict which patients would be more likely to respond to cognitive behavioral therapy. The second was that, even after effective treatment, three of the nine markers remained different between the control group that had never been depressed and the group that had recovered from depression with treatment.

“These three markers move us towards the ultimate goal of identifying predisposition to depression, even in the absence of a current depressive episode,” said Redei.

“Being aware of people who are more susceptible to recurring depression allows us to monitor them more closely,” added co-lead author David Mohr, a professor of preventive medicine and director of the Center for Behavioral Intervention Technologies at Feinberg. “They can consider a maintenance dose of antidepressants or continued psychotherapy to diminish the severity of a future episode or prolong the intervals between episodes.”

The next plan is to repeat the study and the larger population, and also to see if this blood test allows one to distinguish between bipolar and unipolar depression.

In the video below, Dr. Redei explains her work and its implications further.